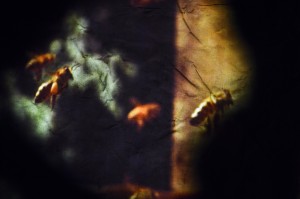 I’ve been thinking about this idea a lot in recent months, which has led me to speak to other people on the subject. What are the basic requirements for a person to take on the lofty (or, depending on how you look at it “dubious”) title of “artist”? What is enough? Am I enough? What is an art practice?

The people whom I’d been speaking with all had certain things in common. They were experiencing changes in the practical structure of their lives that were forcing them to contemplate this question. Changes included: loss of a studio space, a lessening of studio time, a creative dry patch where one feels lost and grasping. The one thing that we could all agree on was that, for all of us as creative people, the absence of creative output was the very definition of despair. When the conditions of creating change and seem to become beyond one’s control; it is a very lonely feeling, it can be very damaging to one’s creative confidence and can lead to the questioning of the validity of one’s practice.

In my case, I went through some very drastic and significant life changes which made me grow very rapidly in almost every aspect of my life. As it so happens, these events happened between this post and my last one over the course of more than two years. I don’t need to go into too many specifics but suffice to say, my life opened up and I grew, a lot; and my practice grew along with me. I tried some new directions and learned a lot, the specifics of which I’ll speak of in more detail in upcoming posts over the next few weeks. The aspect that I’d like to concentrate on now however is a more meta examination of change and growth in the context of an art practice.

So what happened? It started in small ways, which I couldn’t really perceive or make sense of at first. I started working in new media and changed my view of myself from “painter” to “multidisciplinary artist”. I changed my view from an inward one: I make paintings in isolation which represent a core idea and then I present these paintings and ideas in a public exhibition, to one that demanded more give and take: I receive information, ideas and materials from the public and then I use art as a lens to reflect these images and ideas back. I changed my sensibilities toward materials and became much more fluid in my approach. It stopped being about shaping paint to represent ideas and became more about letting the ideas shape the material. This meant that if I had to learn a new skill or even invent a whole new way of creating, I would.

I had always taken a very conscious approach toward materials as a painter. The shape and size of the painting surface were never invisible in my eyes and were always given careful consideration. The paint itself was always carefully considered; I made my own gesso, egg tempera and encaustic paints. So it seemed very natural to expand and grow into new materials and ways of working. The part that changed was that the material had to serve the idea and that the most important aspect of the whole exercise was connecting with other people. So I stopped painting and started drawing on a large scale, making taxidermy bees, helped make a stop motion film and collaborated on a large-scale, public installation.

It was scary and also very exciting! As I changed on a personal level from a very shy human to a more confident and connected one, my work grew too and in doing so I was forced to re-examine my own personal definition of what art actually does and what it is. I know this is a question that has dogged humanity from its very beginning and I don’t pretend to be able to have in a moment of epiphany, stumbled upon the answer to one of life’s great questions. However, as a practitioner of art, I think it’s important to have a working definition. This definition has to be based on a couple of practical considerations: What do I want my art to do and who is its intended audience? For me, suddenly the scope of creating opened up. It stopped being about the physical making of the work and started being about communicating with other people. I felt like I had been given an opportunity to really connect with others in a unique and meaningful way. As a shy and somewhat lonely person this idea was almost overwhelming. Art was love. Art was connection. Art was creating a situation or context within which to have a conversation with other people with give and take and it was ongoing. This became the definition of “practice” for me. As such it could be expanded into all aspects of life, not just in a small studio with a paintbrush!

So what does this mean in the day to day? Well, since art making has become less of an activity and more of a way of experiencing the world, I count the hours I spend in my actual studio less carefully; as though being able to say I’ve been in the studio eight hours a day, seven days a week somehow validates or even indicates the quality of my work. I worry less about identifying as an artist and try to just accept it as a part of my identity; a core value that other things can rest comfortably upon. I try to maintain a deep respect for art-making and therefore, for myself. Some days are easier than others.

This should not imply however, even for a second, that I don’t struggle. I’m a visual artist working a day job in a city that is much too expensive to live in as a low waged worker. I’ve realized how precious time is when so much of my time and energy is caught up just in surviving. It can be brutally hard to motivate yourself to make art at the end of a day when you’ve been on your feet for eight or more hours already, just to pay the bills. I make time in small ways when the practical circumstances of my life demand a lot of my energy and I glory in extended patches of time that can just be dedicated to art. All the while, I try to work constantly toward structuring my life in such a way that eventually I’ll have all the time I need, only for art.

So, dear reader, I hope this explains the lapse in blog making to some extent! More will be filled-in in future posts as I go into more detail about the nuts and bolts of the work I’ve been making recently. I’m seeing the blog itself more as an extension of my practice and hope to use it as a jumping off point in connecting with you in a more meaningful way than before. And so, we’ll talk soon!