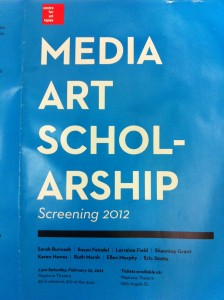 So, what do you do when you have virtually no technical skill in shooting and editing video or recording audio but you really, really  want to make an instructional video about bee taxidermy? You seek help! What better opportunity to learn these skills but through the Centre for Art Tapes’ Scholarship Program? So I wrote up a proposal and was accepted into the program.

I would recommend this program to anyone. If you have project you dearly want to make but lack the technical camera and computer skills to do it, please please apply for the CFAT Scholarship program! The instructors, CFAT staff and mentors are so patient and welcoming and they took me from the point of not even knowing which button to push to “make the camera go” to being able to now independently produce my own video work.

This program consists of a series of workshops about everything from camera operation to the basics of animation to lighting to sound and video editing. The program climaxes in a public screening of the work that the scholarship participants produce. Scholarship recipients are also given great access to equipment and services available through the centre. Another component consists of being set up with a mentor who, through a series of scheduled studio visits and meetings acts as an instructor and helps to guide you through the process.My assigned mentor was Tim Tracey: self-made filmmaker and DIY ninja extraordinaire! Tim was a wacky and wonderful mentor and it turned out that we worked so well together that we ended up working on another project after the scholarship program concluded. However, I must digress at this point because the project in question will be covered in some detail in a future post.

So here I was with a plan and the ignorant hubris to think my project was a very simple, straightforward endeavor that could easily be completed in a weekend. I expected that after this effortless two days I would put my feet up and sip large, fruity cocktails from coconuts while nodding sympathetically at the other, more ambitious scholars who were toiling away on their Citizens’ Kane.

I was very soon to learn that this was simply not the case. Apparently shooting in macro can be a bit of a challenge *cough*. Every part of the shoot was incredibly painstaking because, turns out, it’s kind of difficult to shoot video of activities you can’t actually see very well with the naked eye.  Imagine winding a tiny wire onto a tiny needle and then very carefully trying to locate a specific part of a bee’s tiny head to glue it to; all this occurring while one is trying to record the minute sounds this activity might make and trying one’s very best to capture this minute activity on camera. Not to mention lighting: suffice to say that I had never before concentrated more energy on trying not to melt myself or other people. Tears were shed, lessons were learned and fingers were super-glued to other fingers on a semi regular basis. But the video was made, oh yes! No longer would the world’s hobbyists be deprived of the option of preserving and repairing heirloom quality dead bees for their family to treasure for generations to come.

My plan at the time was to exhibit this video alongside several hundred taxidermy bees. I have yet to do this but it is still a very real ambition about which, I will keep you posted!