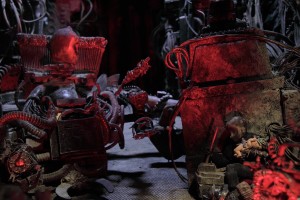 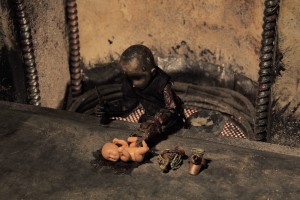 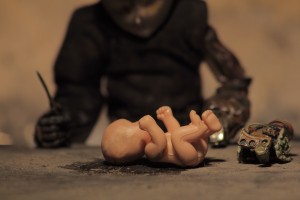 A year and a half ago I received an offer I simply could not refuse: would I like to be a collaborating artist on a stop motion animation project? The question came from my Centre for Art Tapes Scholarship Program mentor Tim Tracey who had won the Helen Hill award for animation for his proposed project Kreb. Kreb sounded like it was right up my alley: creatures and sets would be made exclusively from found and reclaimed materials and the subject matter would have a strong thematic and visual link to my bee taxidermy series, namely: the perversion of the natural world through technology, pollution and rampant industrialization.

What followed was a whirlwind of building, planning and crazy times. Sets were constructed out of discarded electronics, wires, hose, cogs and wheels and basically any gorgeous rusty old thing that suited the Kreb universe. This miniature world was unique, quirky, filthy and beautiful. Creatures were brainstormed and built using computer parts, wire, animal bones and any lovely detritus that we could find.  Chris Macnutt (Who is quite possibly the most patient human I have ever met.) put many hours into creating brilliant and stunning machines that turned and whirred in the background of every scene and added so much beauty and richness to all of the sets. Jason Johnson built the characters Kreb andThe Baby. The hours I spent animating these tiny characters gave me a real sense of wonder at the painstaking detail that was put into them.  Tim Tracey, who conceived of and written the story  and who’s “baby” this project is, spent many hundreds of hours assembling the Kreb universe, building sets and creatures, animating, lighting and light painting and rallying us, his troops to battle! I worked on concept designs, built creatures, helped dress and light sets and worked on all of the small things in a literal sense: my specialty (in this project and in life) is in strange cyborg miniatures. I would be completely remiss if I didn’t mention Joshua Van Tassel who wrote a gorgeous, wonderfully original and heavily industrial sounding soundtrack for Kreb; this soundtrack united all of the visual elements and set the emotional tone beautifully! There are many many other contributors to the planning and building stage including Ed Beals and Susan Tooke. Not the least of these contributors was Ami Goto who provided the warmth of her company and her incredible cooking and was always there to give helpful feedback as we worked. It was definitely a village-raised child of a quirky, endearing and simultaneously terrifying, miniature universe. And this is just mentioning the wonderful humans that I worked directly with!

(Anecdotally, I would be utterly remiss if I didn’t send a shout out to the Wu Tang Clan, specifically The 36 Chambers album. Without this album I fear I would have descended into total madness and I’m absolutely certain that the cumulative hours of dancing I did to Wu between takes prevented me from developing deep vein thrombosis and subsequently dying. Thanks Wu, I owe you my life!)

Finally, everything was assembled and we were ready to shoot!  For a staunch luddite like me, this part presented a serious learning curve. Each shot had to be painstakingly lit and each movement had to be carefully measured. The resultant images were stored in sequence on a series of laptops and hard drives and were then assembled into an animation through a specialized computer program.

Shooting became a sort of meditation: measure, move, take a picture, measure, move, take a picture. Turns out there’s a part of my lizard brain that loves this kind of desperate tedium. And so, day after day we would put sets together and light them and night after night we would carefully film our story, one move and one picture at a time.  If I hadn’t been excited about what we were making already, I became doubly so as our footage started to slowly assemble. I don’t think you really understand “slow” until your stop-animate at twenty-four frames/second. But the company was good and the work was very very satisfying. Martin Helmich came in as our director of photography at this point and the storytelling was pushed to exciting new limits because of his muti-dimentional re-imagining of the Kreb universe through the lens of the camera. Brett Hannam, a saintly man of many talents sat in on some of the insanity of our shoots and spent countless hours capturing footage, solving technical problems and eventually taking on the task of being the project’s producer.

The resultant film is a project that I am definitely very proud to have been able to play a role in creating. I’d love to show it to you but it’s still making the rounds at festivals. As soon as I can, I’ll post a link! 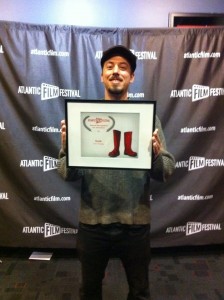 Kreb was awarded a Platinum Remi Award for animation