I think we all, as creative people have our dream projects that given the opportunity, we simply must make. Hive is and was one of those projects for me. As I’ve mentioned before, art-making, at its core for me is creating an opportunity for others to see the world in a different way. Providing a situation of right-brain-strangeness and the subsequent dialogue about this strangeness is definitely one of the things that gives me the most pleasure in life.

Hive has been an idea at the back of my mind for the past four or five years. It would provide an all encompassing, overwhelming, full sensory experience for a broad public audience. The basic idea consisted of creating a large-scale installation where visitors would be given the opportunity to experience the darkness, warmth, sound, sights, smells and vibrations of a living beehive. As one small person with a lot of creative scope but with limited skills in the audio-visual world of sound and video projections this project had been just outside of my grasp but always on my mind.

Fast forward to last Winter when I had the great pleasure of getting to know Jeff Wheaton. The art world is a very small place, compound that reality a few times by the fact that Halifax is a tiny place and another few times by the fact that artists whose work obsesses particularly on bees are almost certainly bound to cross paths and there you have it, an inevitable collaboration! Jeff was the filmmaker in residence with the Atlantic Filmmakers Cooperative. The film that he was creating for the residency was, non-coincidentally, also called Hive. This film is a gorgeous, gorgeous creation and features my bee taxidermy as part of the storyline. I strongly encourage you to check it out, but I digress. Turns out that Jeff and I had both been tapping into the bee ether and both wanted to make a large scale installation along similar lines and so we decided to join forces and create a piece for Nocturne Art at Night, 2013.

Through a lot of brainstorming over the next months we slowly came up with a workable concept for Hive.  The idea of a full sensory experience was at the core of each of our ideas, it was just exactly how this would take physical form that needed a little bit of smoothing out. As the naive dreamer I would wildly shoot out my ideas and Jeff , who knew what equipment and tools we would actually need to achieve our goals, would accurately point out that we “…weren’t Cirque de Soleil”.  In very short order we agreed on the idea that became Hive.  A large yurt, 28’ in diameter would make up the shell of our hive. We would then build a large cylinder that would occupy the centre of the inside of the yurt.  This cylinder would be constructed of organic cotton and wouId be fully impregnated with beeswax which, turns out, is a great surface to back-project video! Inside the cylinder three projectors would play original footage from Jeff’s backyard beehives (Did I mention that Jeff is an award winning cinematographer?) while several large speakers would pump out sound that was also recorded directly from these hives. The rest of the yurt would be blacked out so that the viewer’s full attention would be drawn to the centre and, we hoped, they would become lost in the experience.

So this is exactly what we ended up making and it existed as an installation for six hours on the night of October 19th, 2013 in the Atlantic Filmmaker’s Cooperative parking lot at 5663 Cornwallis Street in North End Halifax. Jeff and I both donned beekeeping outfits and were present to “tend” our hive and field questions about it for the duration of the installation. Hundreds of people came out to see our strange beehive and we had many rewarding conversations with many of the hive’s temporary inhabitants.

A huge shout out of thanks to Martha Cooley and the staff, board and volunteers at the Atlantic Filmmaker’s Cooperative who made this project possible through providing a venue, equipment, technical expertise and support.

I hope to recreate this project in a gallery setting or at a festival again soon. Ill keep you posted about this, oh yes! 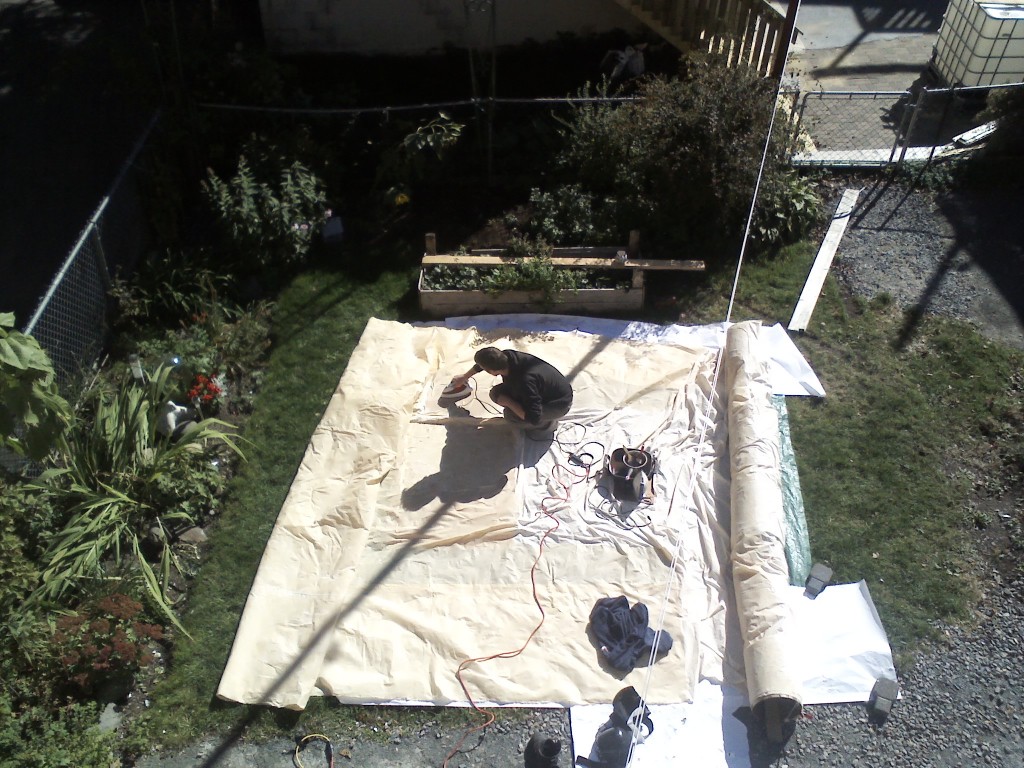 Arial view from my balcony.The long suffering Tim Tracey helps me to cover a piece of organic cotton measuring twelve by thirty feel with hot wax and then iron that wax into the surface. 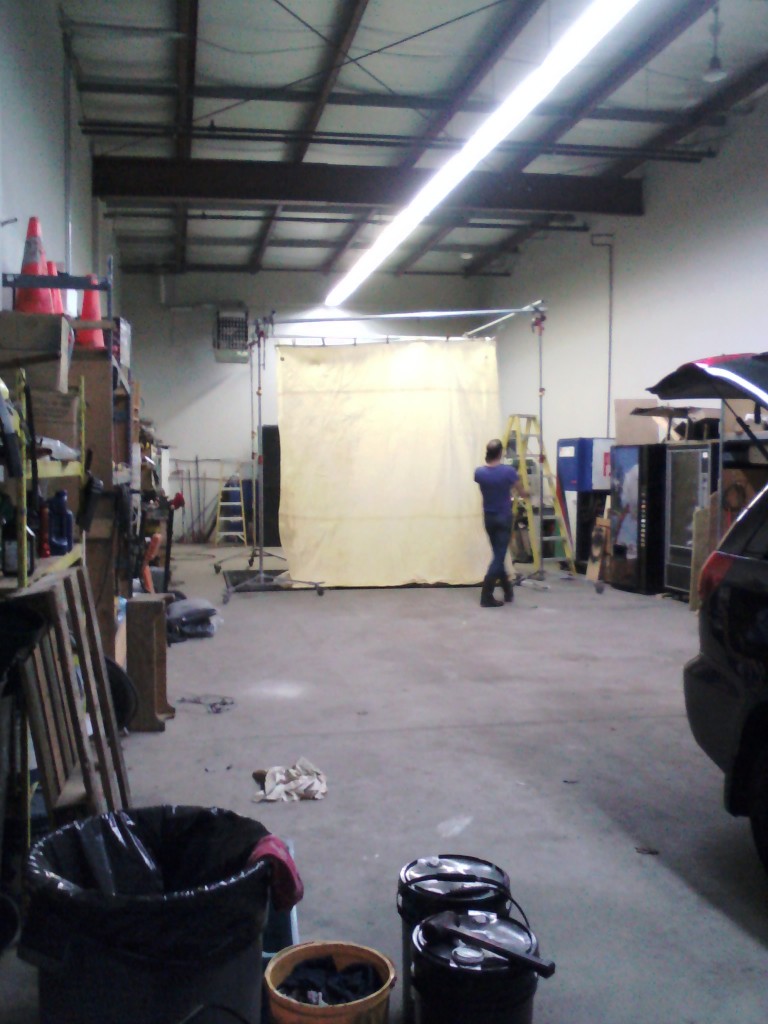 Testing out our project before the actual installation. There’s Jeff for scale. 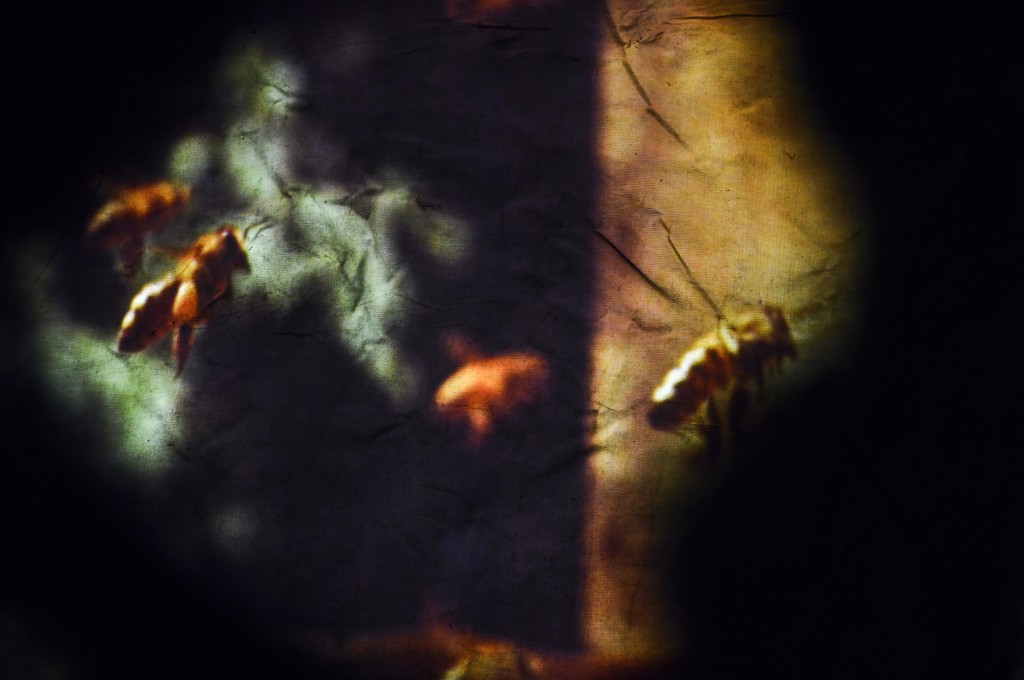