18.05.14
Corpus Melliferous: How I Learned to Stop Worrying and Just Draw Pictures

After spending four years in various and sundry drawing courses at NSCAD I had developed somewhat of a complex about my drawing. “Your drawing could use some work.” and “Your drawing isn’t strong.” were repeated themes in all of my drawing courses. I don’t mean to call for sympathy in admitting this; I acknowledged that my instructors were quite correct; my drawings had always lacked a certain level of technical accuracy. The drawings themselves weren’t bad but my “drawing”: my technical ability to reproduce things as I saw them was definitely lacking.  So as much I understood this difference and as much as I was able to improve my skills, my drawing ability remained something to be desired. I lost confidence and I stopped enjoying making drawings and, for the most part, I stopped making drawings altogether.

In an advanced painting course, some time close to graduation, I learned that there are ways around this shortcoming; I had options! After all, Mary Fucking Pratt (I believe that is her real middle name.) uses an overhead projector to block in her incredible paintings and Chuck God-Damned Close does incredible work using grids! But still, dear reader, I was ashamed! *melodramatic weeping* What was I to do?!

For years I avoided drawing, making only the most rudimentary sketches to plan the compositions of my paintings. I would use grids to block in images from photos for my paintings and hoped there would be no follow-up questions. I felt that I was “getting away with it” but companion to this feeling is the surety that eventually, my proverbial “jig” would be “up”.  And, deep down, I somehow felt cheated; like the robot who couldn’t love, I was the somewhat anticlimactic artist version: I was the painter who couldn’t actually draw all that well.

So, fast-forward a few years to the Fall of 2010. I decided to rent a studio space outside of my apartment and dedicate its use to, among several other things, facing down my drawing demon and befriending it. I wanted to feel comfortable drawing; I wanted to love drawing for itself. I wanted to be like Richard Gere at the end of An officer and a Gentleman and carry the blushing, Debra Winger of drawing out of that damned factory and  “away from all of this.” I had a plan too. I was going to embrace the aspects of creating images by hand that I really enjoyed and push them to their furthest logical conclusion. I love making large work, I love dense texture and I love brain-numbing repetition and, dear reader, as you already know, I dearly love bees.

Of note: my studio space was VERY small, roughly the size of a standard prison cell (I’m not even kidding). It had no windows. As I began to spend more and more time in this claustrophobic space, I descended into a kind of useful madness. I was alone in a very tiny room with no distractions and nothing but my work, how glorious! Things made sense that hadn’t made sense before and I was able to comfortably move slightly away from straight representation and make some visual connections that were slightly more surreal. This break allowed me the comfort to dig in and have fun with brain numbing repetition of form and desperately tedious texture work.

I began experimenting with making large, surreal, bee works on paper. I became deeply fascinated with the only obvious thing that humans and bees had in common physiologically: we both have hair! The drawings were made as large as I could manage given the size of the space. Since the longest wall was eight feet long, my drawings measured five feet high (the height of a roll of paper) by eight feet long. I worked on them standing, crouching and sitting cross-legged on the floor. I worked on them eight hours at a time; I developed carpal tunnel; I loved the hell out of it! Each drawing ended up taking about a hundred and fifty hours to complete and, miraculously, I liked how they looked so much that I stopped painting and really dug in to drawing.

These drawings are still an ongoing series called Corpus Melliferous. So far I’ve shown them at Artists’ Quarter Gallery and Studios (remind me to post some time about putting on an exhibition by oneself), The Hub, and The Confederation Centre of the Arts. I’m hoping to find a venue to show more work from this series soon so you can see them in real life but until then here are the most recent pieces. Photo documented by the incredible Christina Arsenault. 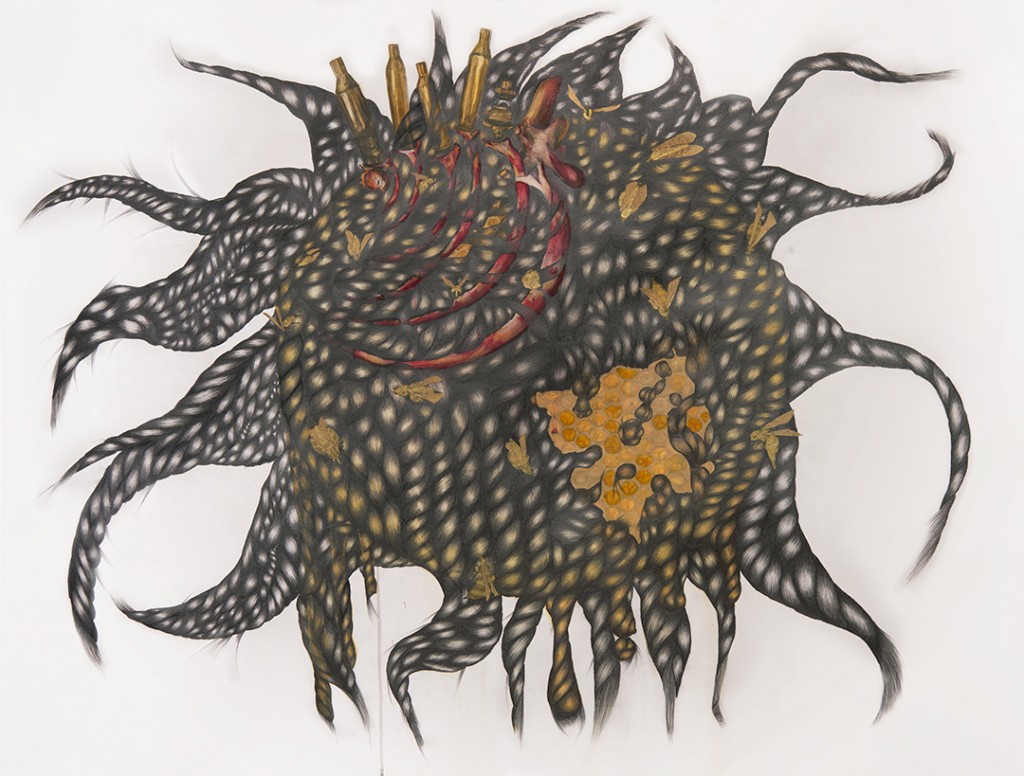 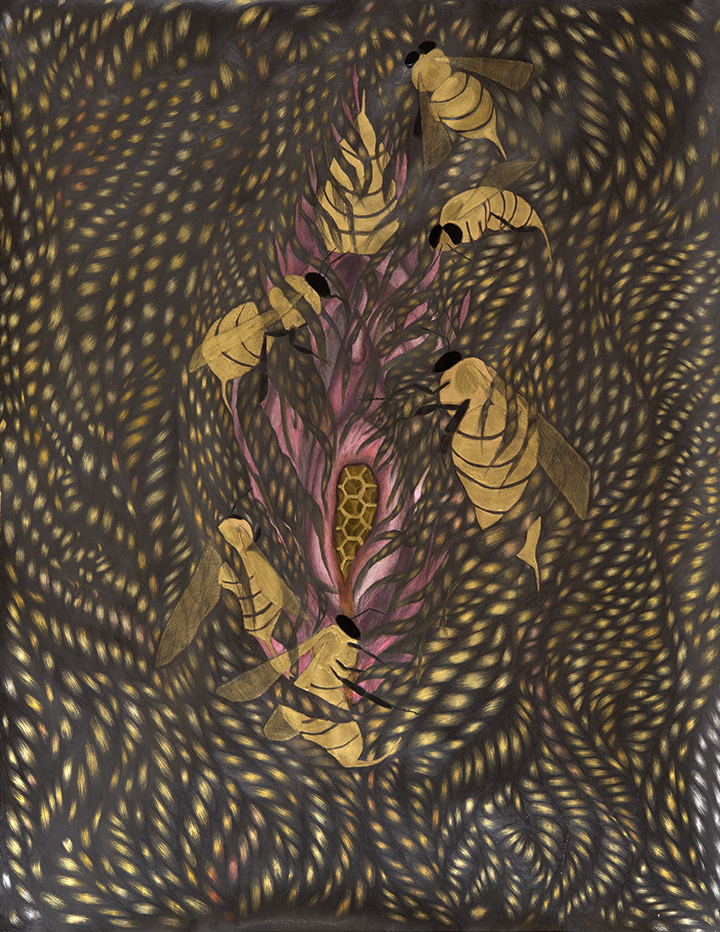